call  Sally for her budget tour. 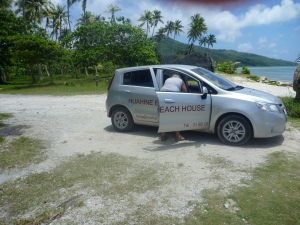 On Friday we took Janet and Lin for a half day tour of the island (these gals are from Oakland and we met them a week ago). 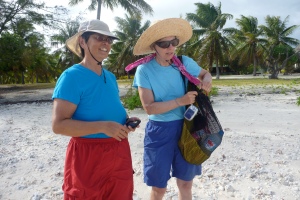 I began with a shell collecting trip on the motu.  We drove down the pitted, potholed motu road and parked at a pension.  We found shells, some fossils on the lava, a lot of crabs, and a few no-seeums. 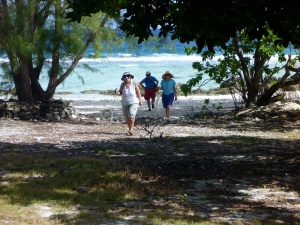 Marilyn leads the way back to the car.  Next stop, a few marae*, a view of the fish traps, the village of Maeva and of course, the area surrounding the Fare Potee with the most accessible grouping of marae.[*Like the related institutions of old Polynesia, the marae is a wāhi tapu, a ‘sacred place’ which carries great cultural meaning.] 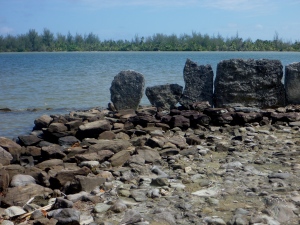 This is one of my favorites and was featured prominently in my short video, moemoea.

Next we stopped for a snack in the middle of Fare, right on the quay at a roulotte called, Surf Burger.  Marilyn and I had fish burgers. Janet had a hamburger.  Lin had an omelet. An astounding 2.5 foot omelet on a baguette. 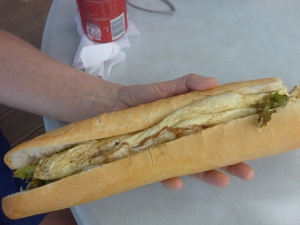 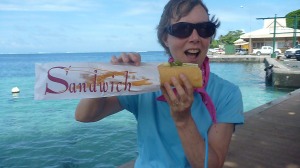 After that it was off to Huahine  iti (the small island) connected to Huahine Nui by a bridge.  We drove by Maroe Bay and around to the very southern tip. As we passed Tsing Tsing’s house, I looked up and saw him tending his gardens on the edge of a cliff.  We saw another favorite marae (Anini) 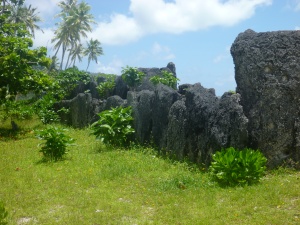 and then Marilyn took off for the beach, vaulting over a coral wall. 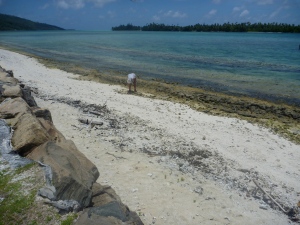 We also stopped for the obligatory photos of the blue place.  Never disappointing. 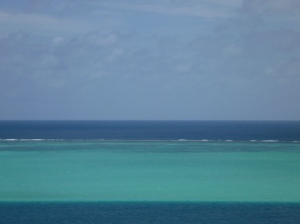 And finally, we concluded our little tour with cold drinks at Chez Tara Restaurant on the small island. Marilyn had the punch with her favorite Tahitian rhum. 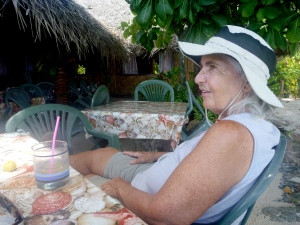 And the hot and sweaty driver had the pineapple juice. 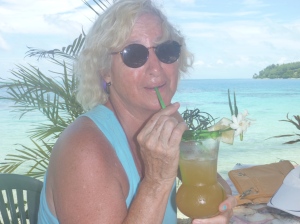 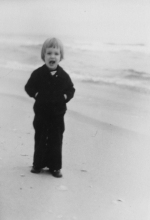