Yesterday Marilyn and I hosted a big luncheon for the ladies (part of the anglophone community with two francophone ladies as well). Our day at the house began at five as we had lots to do before their arrival. Immediately, the power went out. Well, we wondered if we would be cooking anything at all. It returned and then we lost water. All of Huahine lost water. We had chickens from Argentina to wash and cook; Marilyn had a Svingune bread to make. We washed those chickens in the lagoon and all of our dishes and utensils that we were using to make our three main dishes (also, a green bean, shallot, chickpea salad with vinaigrette). By 10:30 we had a trickle of water. I thought the lunch began at 11:00 but we were somewhat vague about the start time or even who was coming. Dorothy skyped me that she had to pick up a car part in Maeva and would not be over until about noon. We started grilling at 11:00 and we decided that Marilyn would not put the svingune bread in the oven until the first guest arrived, whomever that would be. Suddenly, just before noon Joan appeared on bike (from SF and WA, ex-wind surfer, light show designer etc. who spends several months a year in Huahine). Soon after the ladies began arriving. With lots of food for lunch. There was a long period of talking, drinking and relaxing until we finally sat down to our very lavish meal. Marilyn took many of these photographs including this one of the table: 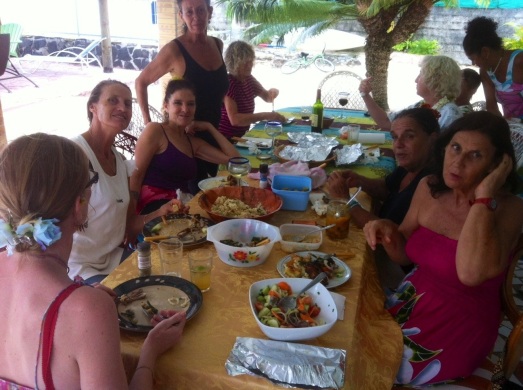 It was a rainy day but the house and veranda is perfect for this kind of event. 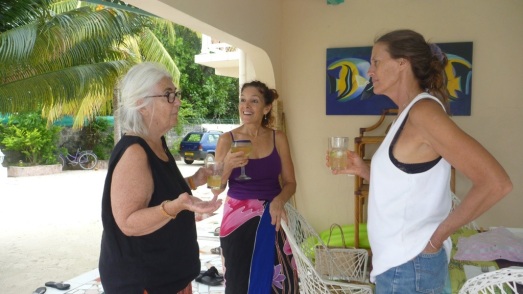 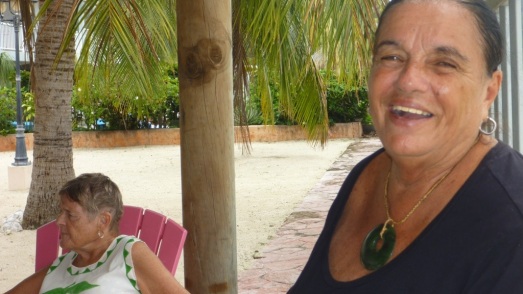 Dorothy (the mastermind behind this event) entertains us. 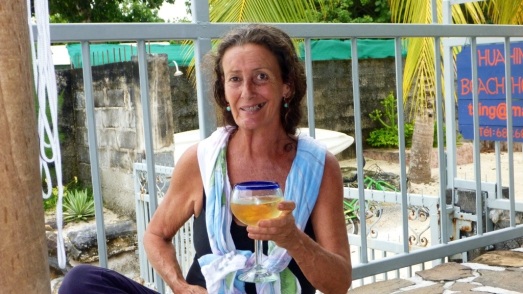 Trisha (NZ, 20 years in Huahine) talks to Sally about yoga and life.

Marty discusses the state of rental housing in Huahine with Florence (France, Osteopathe. 2.5 years in Huahine).

Sally enjoys the cocktail she invented for the occasion which she (why am I writing about myself in the third person?!) named, la vie d’île.

The last few guests departed around six. Melanie’s car battery was dead so Marilyn and Dorothy provided some muscle.

We even had a French couple (tourists) who forced their way through the gate, insisting that they wanted to come to this “restaurant.” I told them this was une maison privée because obviously, these luncheons are a very private affair.

The menu (by the way) included two potato salads, poisson cru (raw tuna in coconut milk), special bread with tapenade and lard, hummus, two cakes, whipped cream, and flan plus a huge bottle of champagne and a couple of bottles of red wine.