We have had more rain this week and suddenly began to feel quite fiu.
Fiu is a definitive Tahitian concept that can mean “I am fed up, tired, burned out, bored, weary” but also, can mean “I just wish to relax.” Basically, it might imply that you need to stop all activities, even if that means failing to show up for an appointment. You might not go to work because you are really fiu. It also means, hey, I accept with some degree of fatalism, the vagaries of existence but let’s just go with the flow. (Any of my Huahine friends are invited to add to this discussion as I am just a beginner where “fiu” is concerned.)

So any how, I was a bit “fiu” but then came the rainbow.

And then, Marilyn, always alert up in her atelier, took this lovely production still of me,

and clearly, I was “fiu” no more.
The rains came and went that day; the wind howled but we had images to make and baguettes to buy, and ukelele tunes to practice, and plans to make.

The next day, Marty, her daughter, Wendy, and Marty’s granddaughter, Tehau came for a swim in the late morning. We had a snack and sampled what we now call “Moorea G and Ts”-named for the local gin that I discovered at the Super Fare Nui. I am not sure what it exactly contains; certainly there are no juniper berries involved. 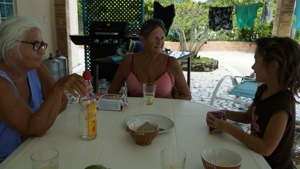 Tehau asked Marilyn if she could see her studio. After viewing some of Marilyn’s drawings, she exclaimed, “these are beeuuutiful. Beeuuutiful.”

Last visit Llyn did alot of the sweeping and raking. In fact she wrote a parody right after I arrived that went, “who’s going to sweep your lily white sand…” Well, finally, I did.

The ukelele lessons are coming to a close. Two more lessons. Today was Jimmy’s birthday and I sang him “happy birthday” on the uke with a little pata pata (def. solo) and Tahitian strum. He said that no one had ever done that for him before. Marilyn shot a few photos of the end of a very sweaty and difficult private lesson.

After, we walked home and got ready for swim #1 of the day. Tonight we will go to a fest in town (it will feature a zumba performance, some Tahitian dancing, Jimmy singing and playing with a musician from Alaska, and other music.

My discussion of “fiu” will be continued later, with a treatise on how the head lei can ward off “fiu” and why we all must RELAX.